Most changes to current excavators appear relatively small. But the net effect of those many changes has resulted in a crop of dramatically improved models.

The changes have also expanded the tasks excavators are now doing.

“We are long past the day when there was just a bucket on the end of a stick,” says Jonathan Tolomeo, Komatsu excavator product manager. “Excavators have become toolcarriers.”

That versatility is further increased by the tiltrotator, a device that is catching on in the U.S. Experts we talked to say the attachment, which enables 360-degree rotation and side-to-side tilt, speeds up production.

Justin Steger, Deere solutions marketing manager for site development and underground, adds that tiltrotators also increase efficiency in confined spaces and can save 15% to 30% in time across all applications.

“They offer the same appeal as do zero- and reduced-tailswing machines, but at the other end of the excavator,” Steger says. “And there’s no need to decouple the bucket to reverse it for tricky digging situations.”

Here’s a closer look at what’s new with excavators:

Luke Hill, excavator product specialist at Bobcat, says the company’s two large excavators, the E145 and E165, have four power modes. In addition to Standard and Economy, there are Power and Power +. 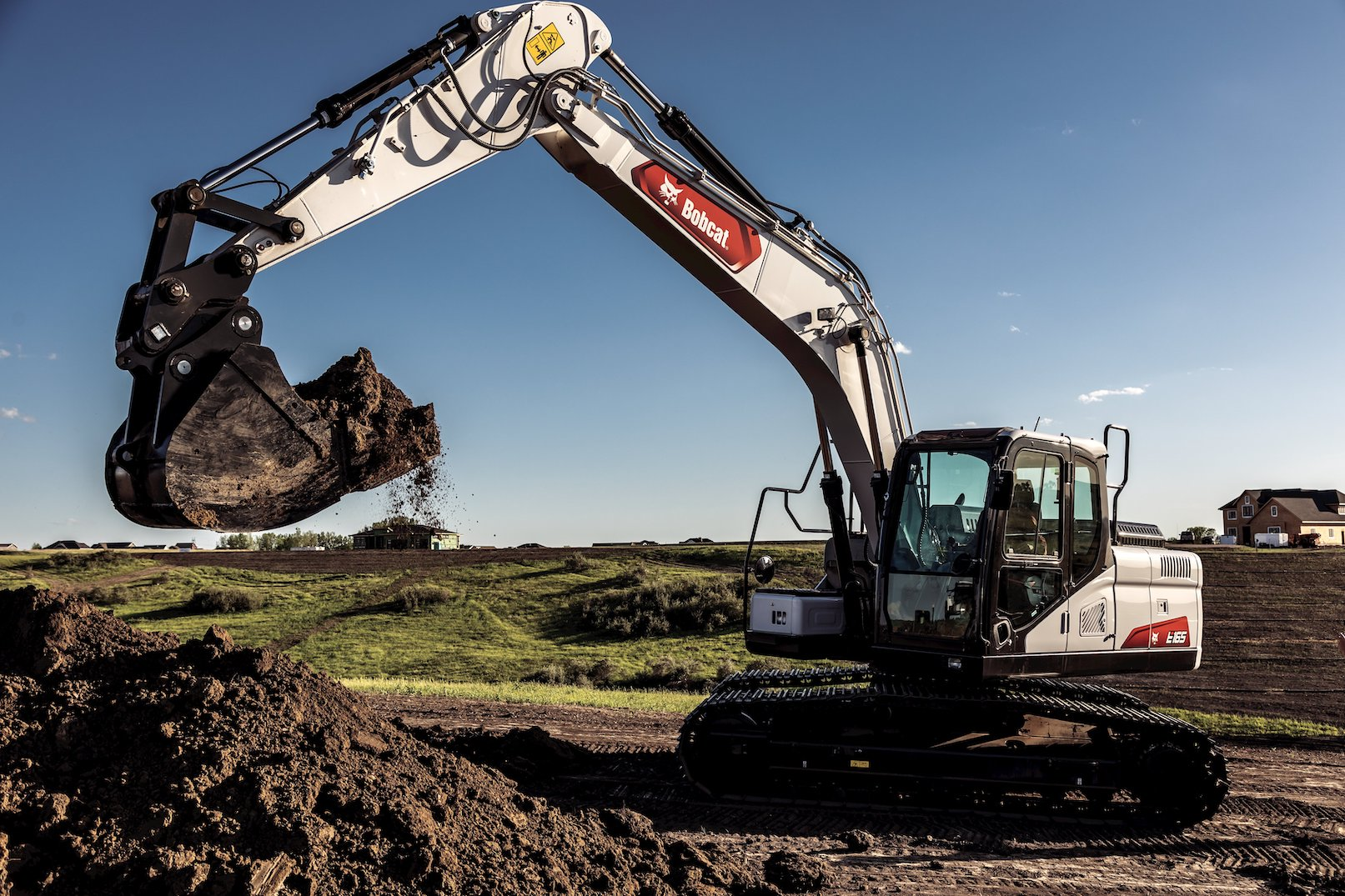 “In the last four or five years, we’ve seen huge growth in specialty applications,” says Bart DeHaven, excavator sales, Kato-CES. He sees two key factors driving this growth. First, lots of employees at construction firms are leaving to start their own companies, many of them in narrowly focused markets. Second, many smaller contractors are branching out, such as the plumber who now also does site prep.

“We understand these shifts,” says DeHaven. “We’re a small, family-owned company in business since 1994, and we relate to and support entrepreneurship.”

All three models of Kato’s large excavators come with dual auxiliary hydraulics, adding flexibility. The two largest come standard with full electronics, including monitor with two cameras and telematics, three digging modes and auto-idle. The cabs have heating and air conditioning and six-way adjustable seating. The excavators are also equipped with a pattern change valve and an on-board pump to facilitate refueling. 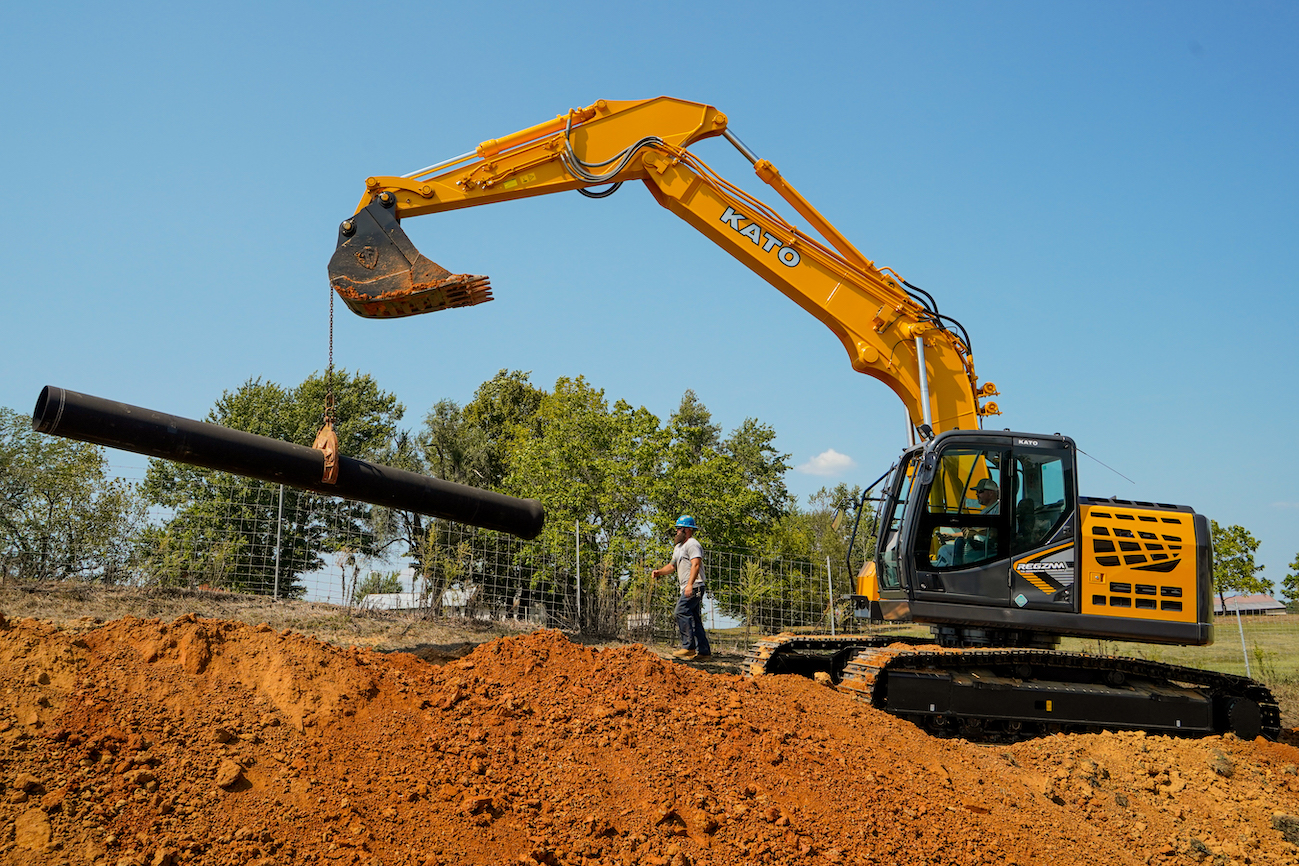 The HD512LC-7 and HD514MR-7 excavators make up Kato’s Regzam series. Standard features for both are cab with heat and air conditioning, retractable windshield, dual auxiliary hydraulics, side- and rear-view cameras and pattern change valve. The 512LC has a standard long undercarriage, while the 514MR is a minimal-swing model and comes with a blade. Both feature a four-pump hydraulic system for fast response.KatoTolomeo and Andrew Earing, who is also an excavator product manager at Komatsu, say the company’s recently unveiled intelligent Machine Control 2.0 expands the adaptability of its excavators.

Tolomeo and Earing point out two key features of iMC 2.0. One is bucket angle hold, which maintains the bucket angle throughout the grading pass. “With this feature, the operator need only manage arm-in input,” says Earing.

The other key feature is auto-tilt bucket controls. Models with iMC 2.0 work with any bucket manufactured with a tilt feature. This requires field installation of sensors on the bucket so the system has data to work from. “The system allows the machine to match the design surface via machine control, increasing versatility and reducing the need to reposition the excavator throughout the day,” says Tolomeo. 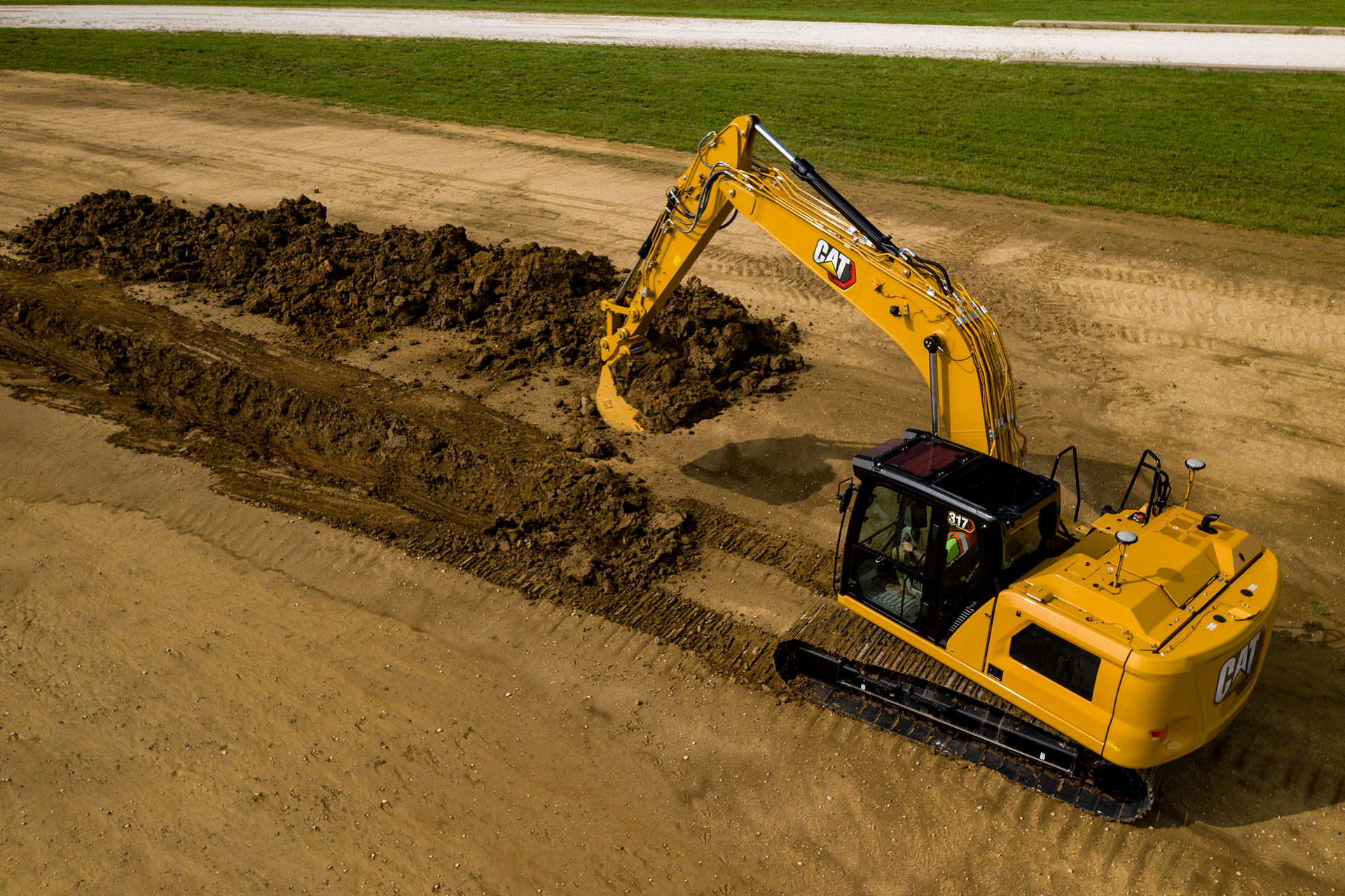 The Cat 317 has an operating weight of 40,200 pounds and is powered by a Cat C4.4 engine rated at 130 horsepower. Entry and exit with the new, larger cab are made easier by the tip-up left console. Productivity is boosted up to 45% compared to traditional grading when the 317 is equipped with the Cat Grade 2D system, which has indicate-only and laser capability.CatCat’s Next Gen machines have electrohydraulics instead of pilot valve controls. While EH controls benefit the operator, that’s just the beginning.

“The new design allows concentration of the hydraulic system near the center of the machine,” says Stellbrink. This makes the system more responsive and reduces parasitic and frictional losses for improved performance.

With the Case SiteControl 2D/3D semi-automatic excavation system, the operator can select automatic control of the boom, bucket, tilt or rotate or any combination of these. Machine control is fast and efficient at digging to grade; it also minimizes over-excavation (undercutting). 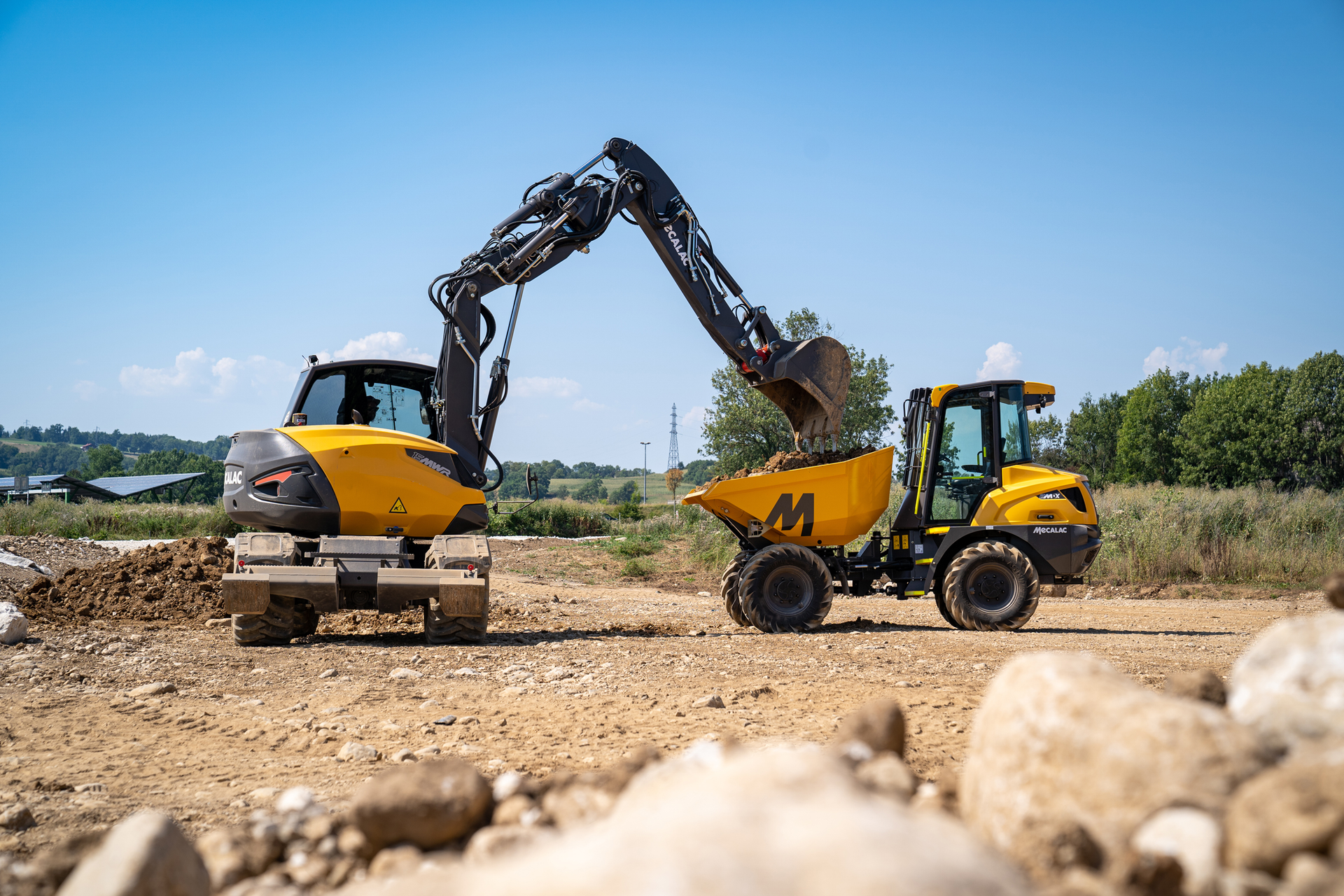 The 15MWR wheeled excavator from Mecalac has perfect primary balance with a 50/50 weight split front-to-rear and side-to-side, the company says. The two-piece boom and four-wheel, three-mode steering enhance maneuverability. Operating weight is up to 34,079 pounds. The Deutz engine is rated at 136 horsepower.MecalacPeter Bigwood, general manager, Mecalac North America, says, “Our dealers tell us the trend is toward wheeled models. Wheeled excavators offer so many advantages in terms of positioning, maneuverability and roading that they are now the preferred machines for many applications.”

The same design philosophy Mecalac uses in its smaller excavators carries over to its 15MC crawler excavator and 15MWR wheeled excavator, including the company’s two-piece boom.

“Visibility is also emphasized,” says Bigwood, “especially to the rear where other excavators have tall engine compartments or large counterweights obstructing the operator’s view.”

Undercarriage costs are one of the top costs related to excavators, “but they’re also the least glamorous topic,” says Brian Stellbrink, Cat senior market professional. Undercarriages are the most mature system on an excavator, and “most of what’s been used in the past is carried forward because it works.”

Examples include sealed track, easy access to tension adjusters, and track roller and frame designs that shed debris and make cleanout easy and effective. Likewise, operators continue doing what they’ve always done, including a daily walk-around, maintaining proper track tension and cleaning out the undercarriage at the end of each day.

Cat has improved bearing contact areas on upper (carrier) rollers and select bottom rollers. It offers track that is narrower but thicker for use in rock. This narrow-but-thick track provides good wear characteristics and service life with minimal twisting force on the track. 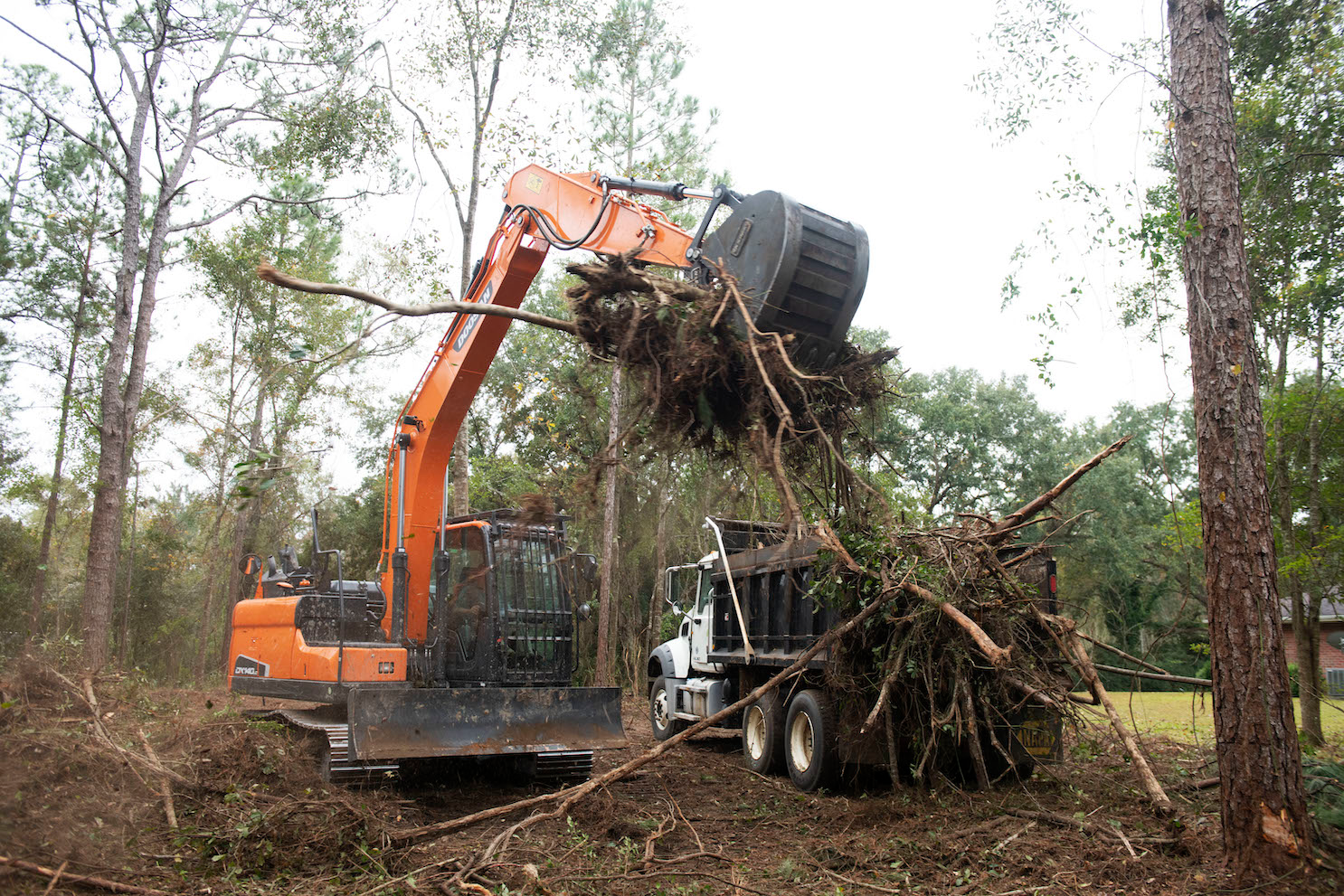 Idle time has been associated only with wasted fuel, but it also represents wasted hours in both equipment life and warranty coverage. Low temperatures during idle can jeopardize the performance of exhaust aftertreatment systems.

As the market moves toward hybrid and electric machines, Kleingartner advises owners to keep in mind that all machines have energy costs, whether in gallons of diesel fuel or kilowatt-hours of electricity. 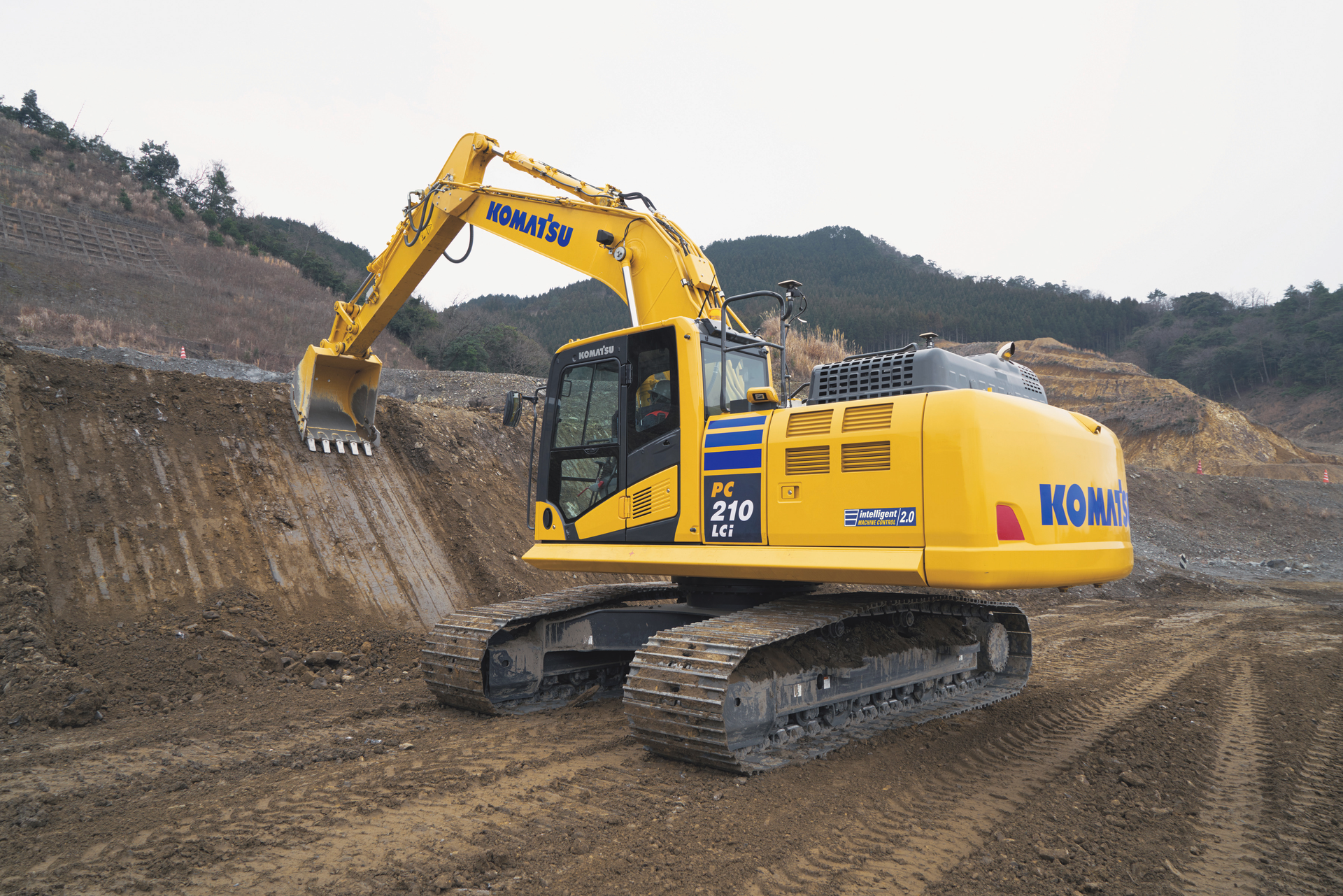 The Komatsu PC210LCi-11 excavator features the company’s iMC 2.0 and is part of its Smart Construction products, services and digital solutions. It is Komatsu’s smallest machine-control excavator and is targeted at contractors who need versatility with an excellent range of performance, the company says. Operating weight is up to 53,882 pounds on this 165-horsepower machine.Komatsu“When it comes to idle time, how long is too long is highly dependent on the application,” says Mark Wagner, manager, services business, Hitachi Construction and Mining. “Idle time itself isn’t necessarily bad, but excessive idling is.”

Wagner says excavators may be productive while idling when setting structures and holding them in place. While these processes may entail several minutes of idling, Wagner says that excavators in production applications should see no more than 30 seconds of idle time between trucks.

“Most mass earthmoving or quarrying applications work on a 50-minute productive hour, which means about 17% non-productive idling time. If data from telematics, such as Hitachi’s ZXLink, show 30% or more idle time, the contractor should consider adding another truck to increase productivity and reduce idle time.” 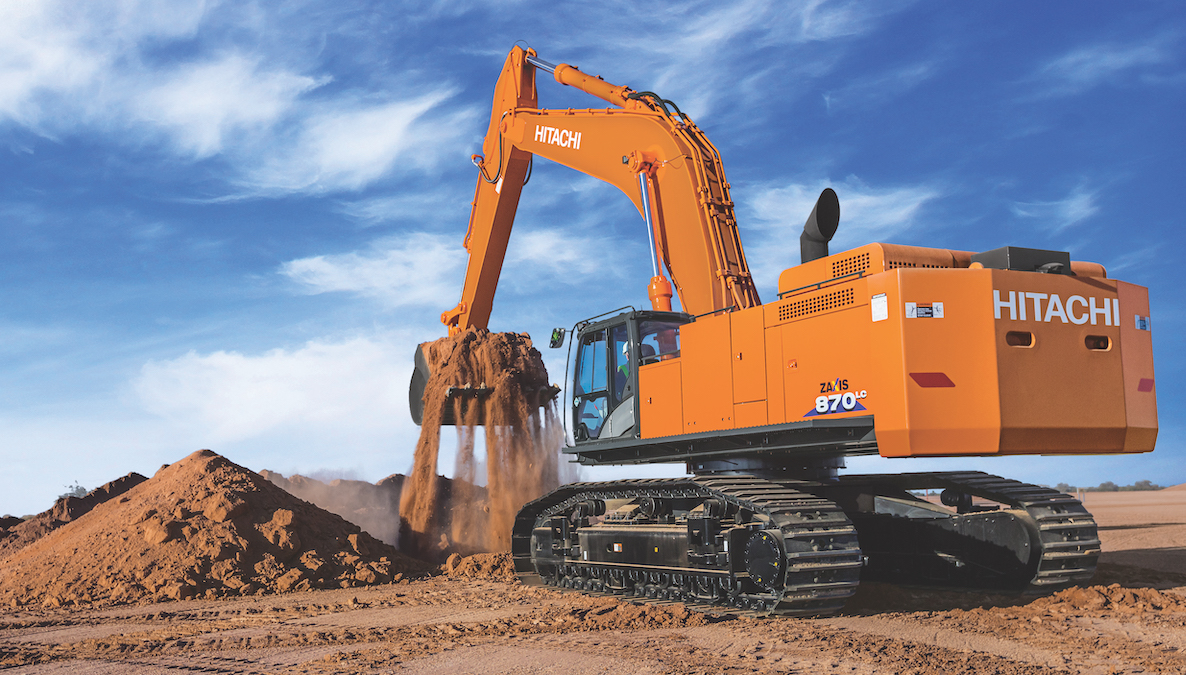 The ZX870LC-6 is Hitachi’s largest production-class excavator with 512 horsepower and a 188,716-pound operating weight. The sealed and lubricated undercarriage has large idlers and rollers as well as strutted track-links for long-term durability and performance. Short-throw, low-effort pilot levers provide smooth, precise control. Easy spin-on main fuel filters and two additional water separators help ensure clean fuel. No diesel particulate filter is required.HitachiResidual value is a big factor in life cycle costs, but “owners of large excavators tend to keep them for the life of the machine,” says Chris Lucas, excavator product manager, JCB, “so residual value is not a key consideration.”

Even so, JCB does things that protect residual value such as having a 100% steel body and double-skinning the doors and engine compartment. JCB tests main components to ensure at least 10,000 hours of useful life. 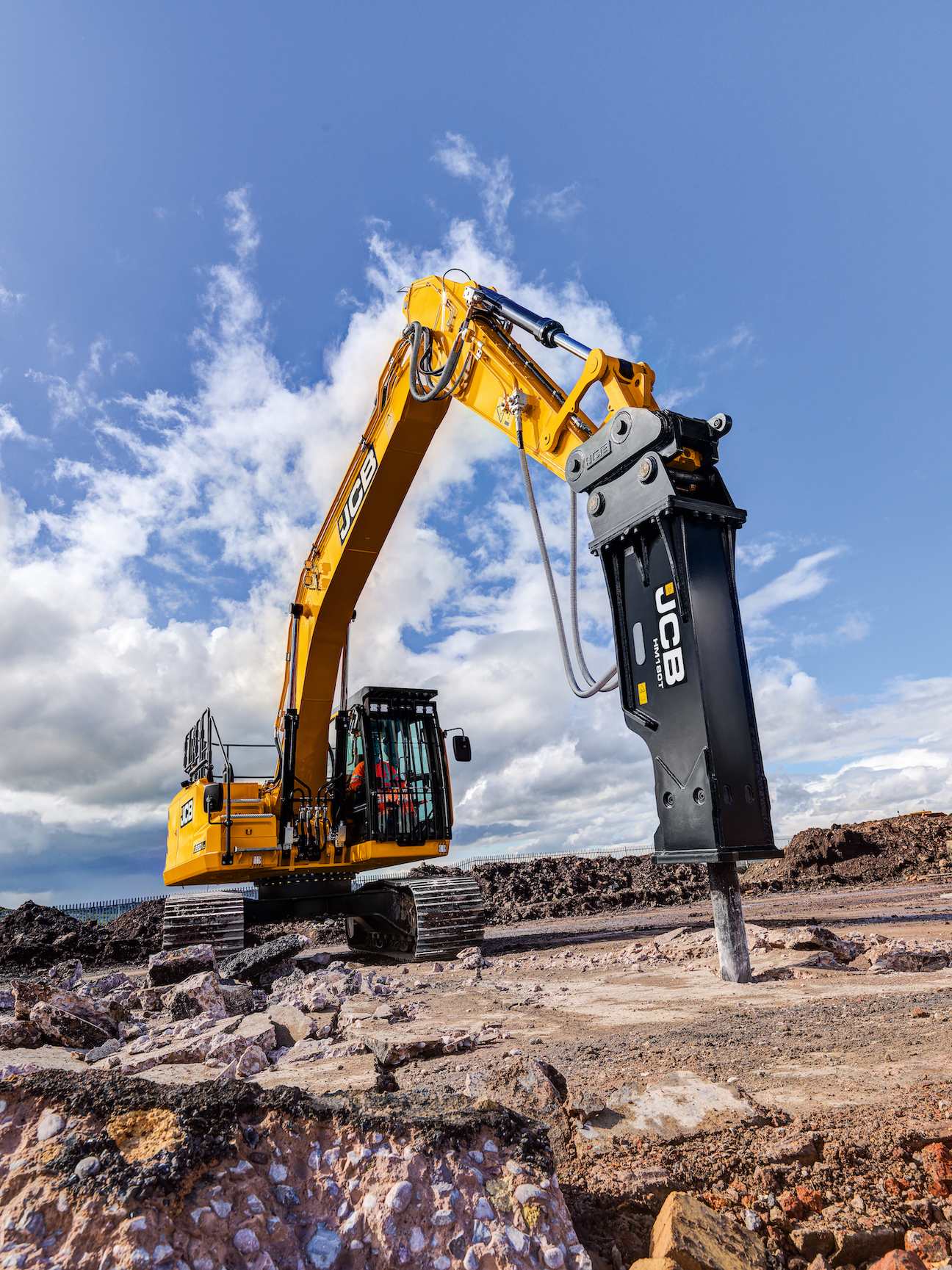 The first in the X Series from JCB, the 220X has an operating weight of 52,450 pounds and a JCB EcoMAX engine rated at 173 horsepower. The CommandPlus cab has a low sound level of just 67dB(A) and Grammer seating with wide, adjustable armrests and the ability to recline up to 145 degrees. A start-stop button makes restarts easy and allows return-to-operation within 2 seconds.JCBAnother way to protect residual value is to configure the excavator in its final form from the factory, says Waldschmidt. “For example, equipment that comes with machine control solutions such as Case SiteControl installed by the OEM and purpose-fit for that machine will hold greater value in the secondary market.”

Tiltrotators have become popular, due in part to the desire to get more versatility out of excavators. Dan Collins, product marketing manager, Kobelco, cites some considerations.

With the bucket positioned straight, as it would be without the tiltrotator, differences in bucket breakout force, arm-in force and bucket curl are negligible. “This all changes when the bucket is operated at an angle or when working with a wide cleanout bucket.” This shouldn’t matter as long as the excavator is not already working at 99% capacity before the installation of the tiltrotator.

Collins says tiltrotators are useful in most applications. “The one exception is heavy production and loading.” Sloping, trenching, fine grading, and working around things all lend themselves to tiltrotator use. He recommends three buckets as a minimum: trench, pipe (narrow) and grading (wide). 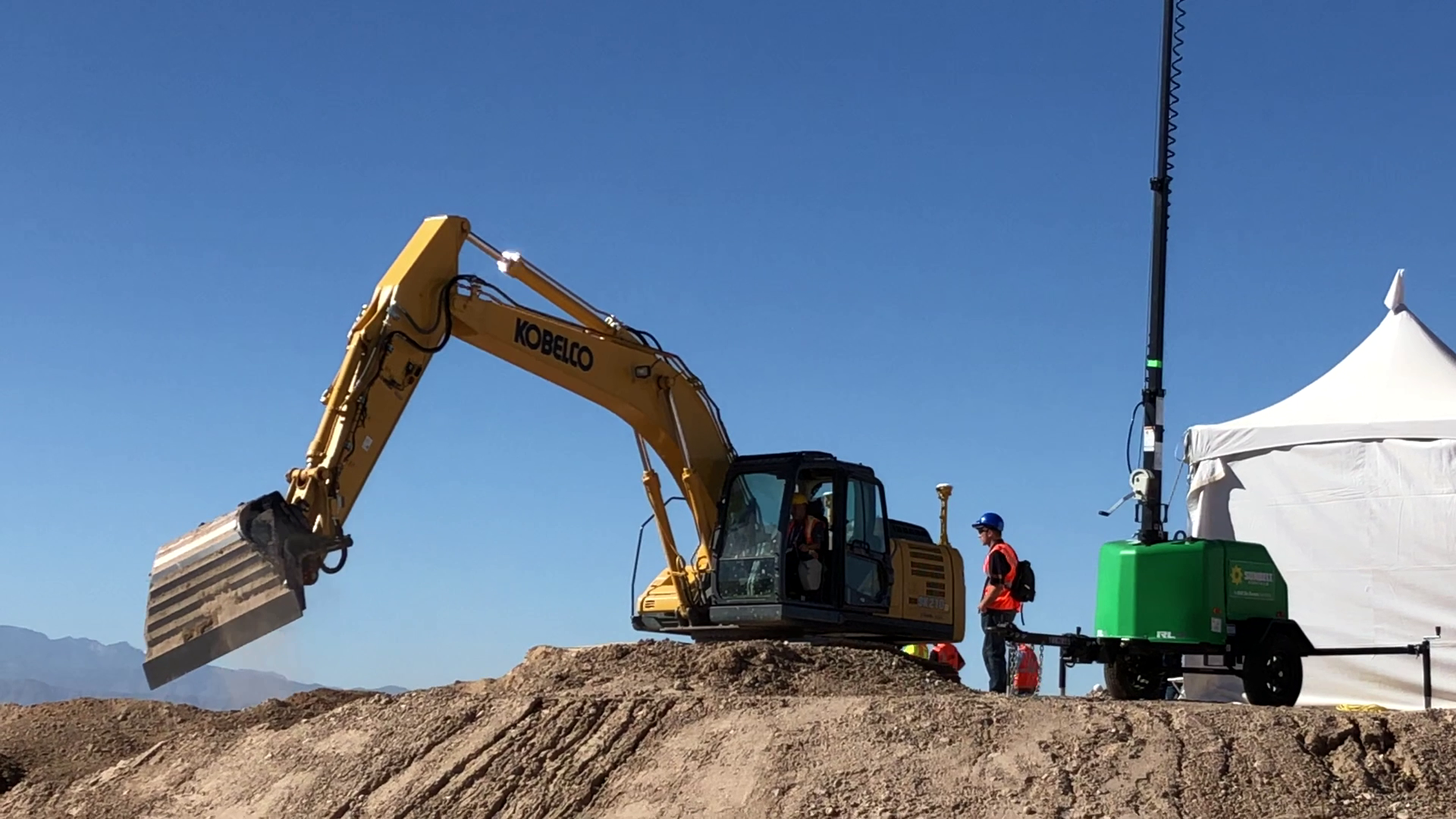 The Kobelco SK210LC-10 has an operating weight of 49,400 pounds and 160 net horsepower. Fuel economy is up to 6% better in Eco mode and up to 10% better in S-mode while the highly efficient hydraulic system can improve digging productivity up to 7%. Power boost provides maximum bucket digging force of up to 38,500 pound-feet.KobelcoTodd Cannegieter, product manager for attachments and special applications, Volvo CE North America, offers tips for first-time users of tiltrotators. “You might feel daunted at first, but a little practice will quickly raise your proficiency.”

He advises pairing the tiltrotator with compatible attachments, such as Volvo’s tiltrotator grading bucket, which has a special shape to keep the corners of the bucket from contacting the working surface through the many positions of the tiltrotator. “Remember you have more grease zerks than before, and they aren’t likely to be hooked up to an auto-greasing system.”

Cannegieter says it may take some research to determine whether a tiltrotator is compatible with the machine control system on your excavator. Volvo is rolling out its SmartConnect feature to help ensure compatibility of tiltrotators from all major manufacturers with Volvo’s Dig Assist system.

As for installation, Deere’s Steger says that’s best left to the dealership. Make sure the tiltrotator matches the hydraulic specs of the excavator and be mindful of the extra weight a tiltrotator adds to the front of the machine.

“You’re tapping into the machine’s electrical and hydraulic systems,” Steger says, “and that takes specific knowledge and skill to do successfully.” 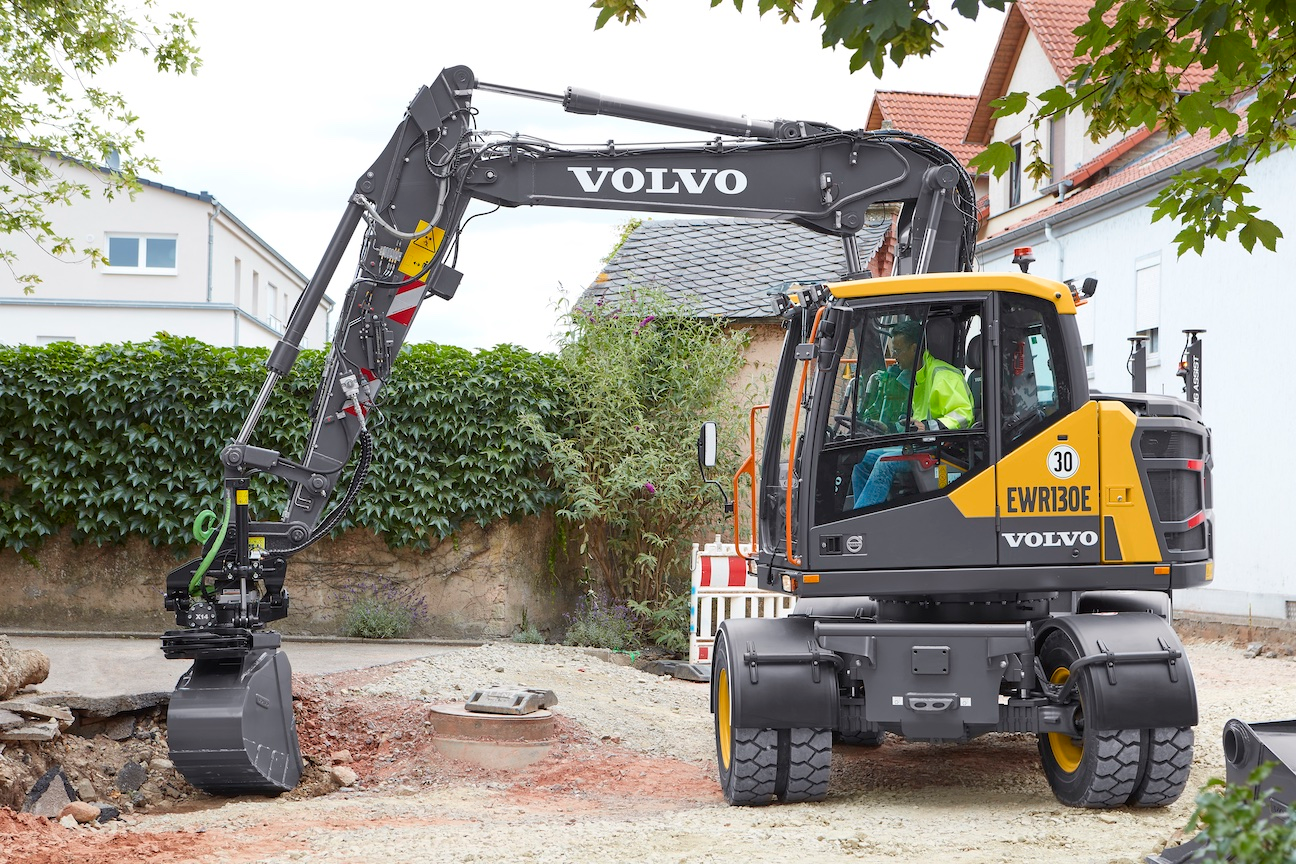 The Volvo EWR130E wheeled excavator becomes even more versatile with the optional tiltrotator. Volvo notes that the EWR130E is by design a compact machine yet has a cab more in common with larger wheeled excavators. Operating weight is up to 31,747 pounds. Gross horsepower is 121, and breakout force is 24,392 pound-feet in Boost.Volvo CE

Did you miss our previous article…
https://www.neiloganconstruction.com/?p=86