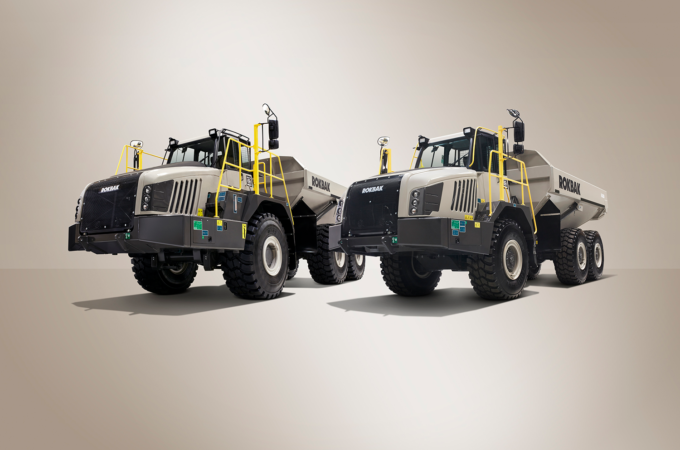 Terex Trucks is now Rokbak, in a move that removes the Terex name from the articulated truck line Volvo Group purchased in 2014.  “Now is the right time for us to carve a brand new name for our business,” says Paul Douglas, Rokbak managing director. Under the Rokbak brand, Volvo Group subsidiary Volvo Construction Equipment is offering two models, the 30.9-ton RA30 and the 41.9-ton RA40. Coming in new colors and livery, Volvo says, the two units offer better fuel economy, lower emissions, improved safety and greater durability than the previous Terex Truck models, TA300 and TA400. Improvements include Tier 4 engines, a new transmission on the RA30, the introduction of Haul Track telematics and an emphasis on operator comfort and safety. The RA30’s ZF transmission has a 4,000-hour oil change, and the RA40’s Allison transmission comes with a 6,000-hour oil change. In addition, the RA40’s transmission has adaptive shifting and drop-box two-speed ratios, helping the truck maintain optimum momentum, Volvo says. The Haul Track telematics offers information such as machine location, hours, engine speed and idle time, machine operating

A new Interstate 17 bridge in Phoenix is nearing completion as concrete was poured recently for the northbound deck. The I-17 northbound bridge over Central Avenue is replacing a span built in 1962 that has been demolished in stages while the new bridge is constructed. The concrete was applied by an extended boom pump system that was based at street level, according to the Arizona Department of Transportation. “For this particular operation, 545 cubic yards of concrete were poured for this span in just a matter of hours,” reports ADOT. Check out this ADOT video of the concrete pour: CMSBrowserComponents.load({ el: ‘#vue-1630614064588-199’, name: ‘OEmbed’, props: {“mountPoint”:”/__oembed”,”url”:”https://vimeo.com/585079251/d679f683e3″,”attrs”:{“type”:”oembed”,”id”:”https://vimeo.com/585079251/d679f683e3″,”element”:”aside”}}, hydrate: false }); Work on the $13.5 million project began in May 2020. The southbound steel-girder bridge has been demolished and reconstructed. Traffic now uses that bridge while the northbound span is built. Once completed, traffic will travel three lanes in each direction. Along with the upgrade, the new bridges will be wider to eventually add lanes after funding becomes available, ADOT says. The bridges also provide increased clearance for commercial trucks and to